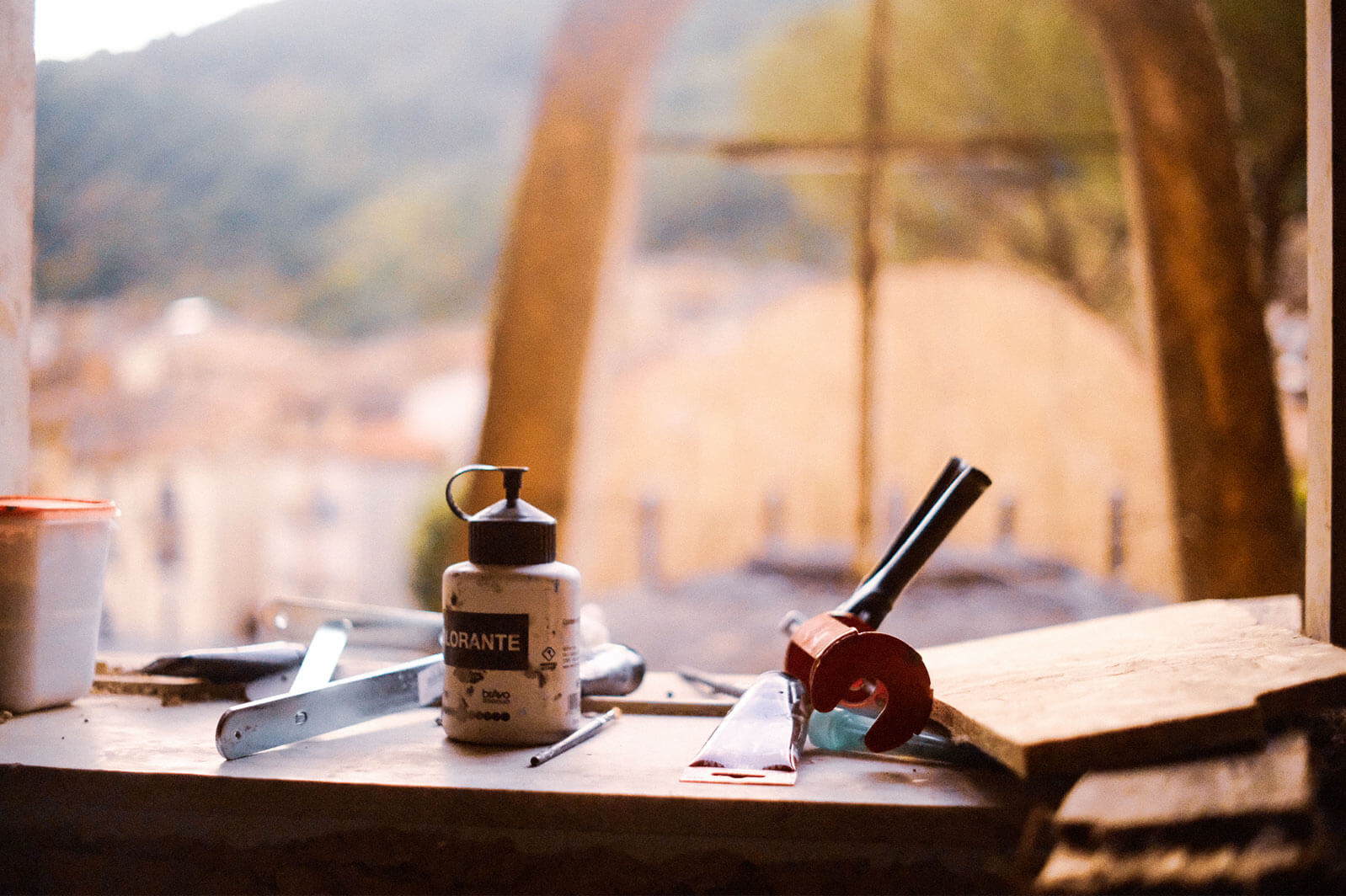 Luis Gomez de Teran was born in Caracas (Venezuela) but moved to Rome at a young age, where he still lives and where he has nurtured his artistic calling, which initially manifested through the language of graffiti and culminated in figurative painting. Gomez’s art features an expression of realism that is inspired by Baroque painting, through the use of chiaroscuro and the strong contrasts of flashes of light and shadows that shape the bodies of his figures, which are generally portrayed on dark monochromatic backgrounds, illuminated by sweeping shafts of violent and theatrical light. His themes are reminiscent of classical and mythological literature merged with the poetry of the street, which investigates reality and the conflicts of the human soul. These are urban paintings that are accompanied by poetic verses written in the margins of the walls.
Often in the process of creating his works of art on the street, he chooses models from the place where he is asked to create his piece, taking photos of them, which he then uses as reference images when painting. In recent years, in addition to his work on canvas (Nox Omnibus Lucet – The night shines for everyone 2016, his first solo exhibition at the Galleria Varsi in Rome) has added to his street artworks with the use of brush and paints on wall, as well as the use of applied materials such as stones, mirrors, glass, iron.
His murals appear in a number of Italian cities, as well as around the world, such as Berlin, Barcelona, Mumbai, London, Zarzis, Torrijos. He has also been a promoter of festivals and artistic initiatives (Gian Maria Volontè in Rome, 2016). 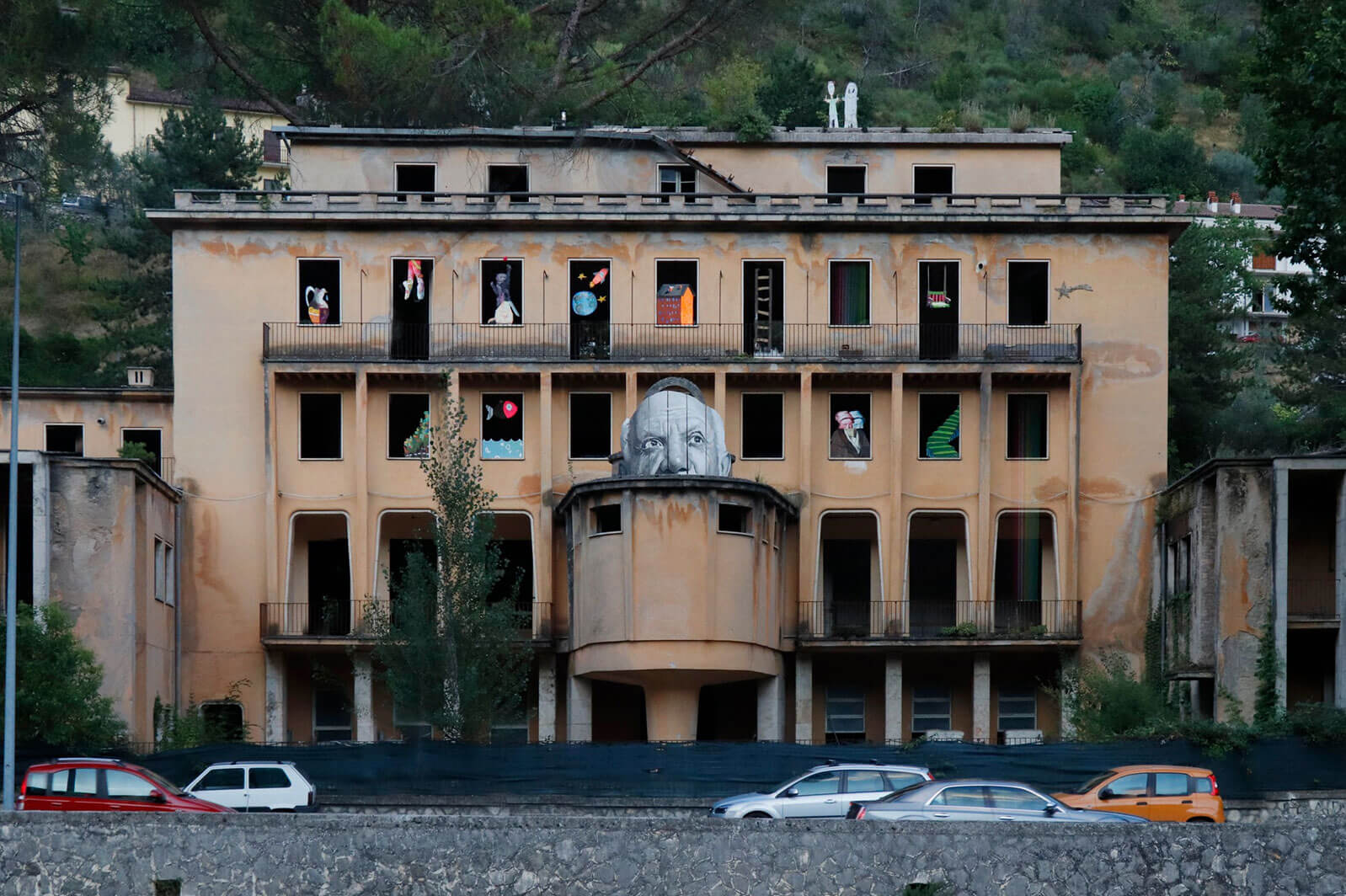 Description: The work stems from a reflection on the history of the structure that it has been created on. A kindergarten is a place for play, for creativity; it is the theatre for the imagination and fears of the children who bring it to life.
The artwork, a mixed media piece of theatrical scenery that incorporates the entire central façade, brings these impressions back in the windows and doors of this long-closed building, weakening the veil between the imaginary world of children and the tangible world of adults with real and surreal images that are immediately suggestive of a child’s drawing style. The memories of the protagonist, represented by the portrait of an elderly man placed at the architectural centre of the building, recreate the impressions of a place and time that no longer exist, except in his memory.

Asylum, from the Latin for refuge or shelter, is rendered in modern Italian as “asilo”, which is often used for a kindergarten or nursery school. Here the English usage that refers to a mental institution, better encapsulates the meaning of the themes examined in the piece. 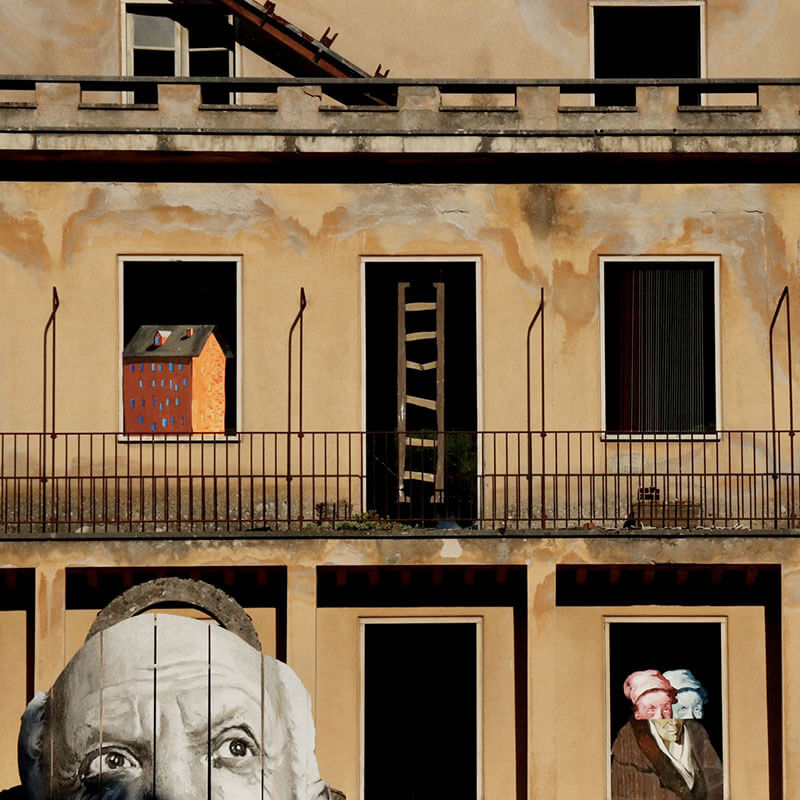 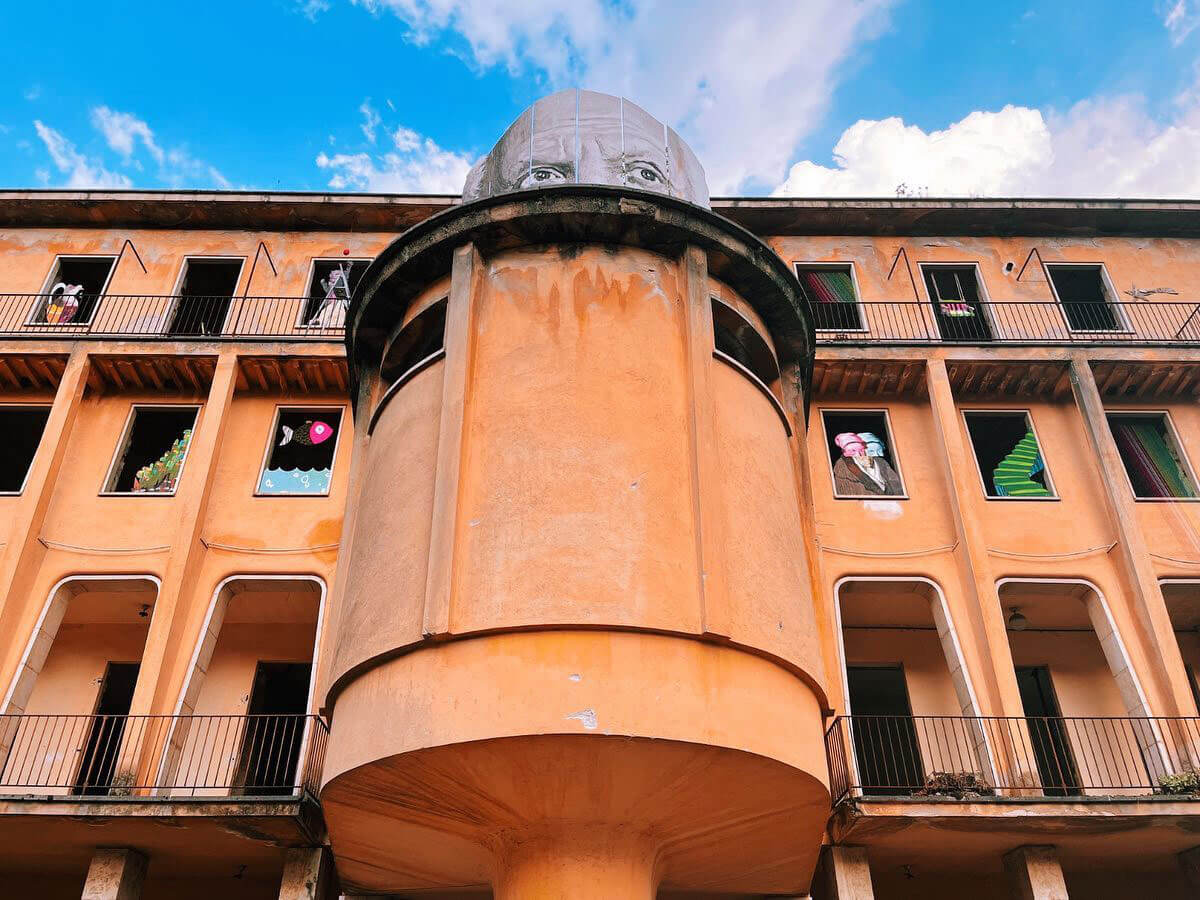 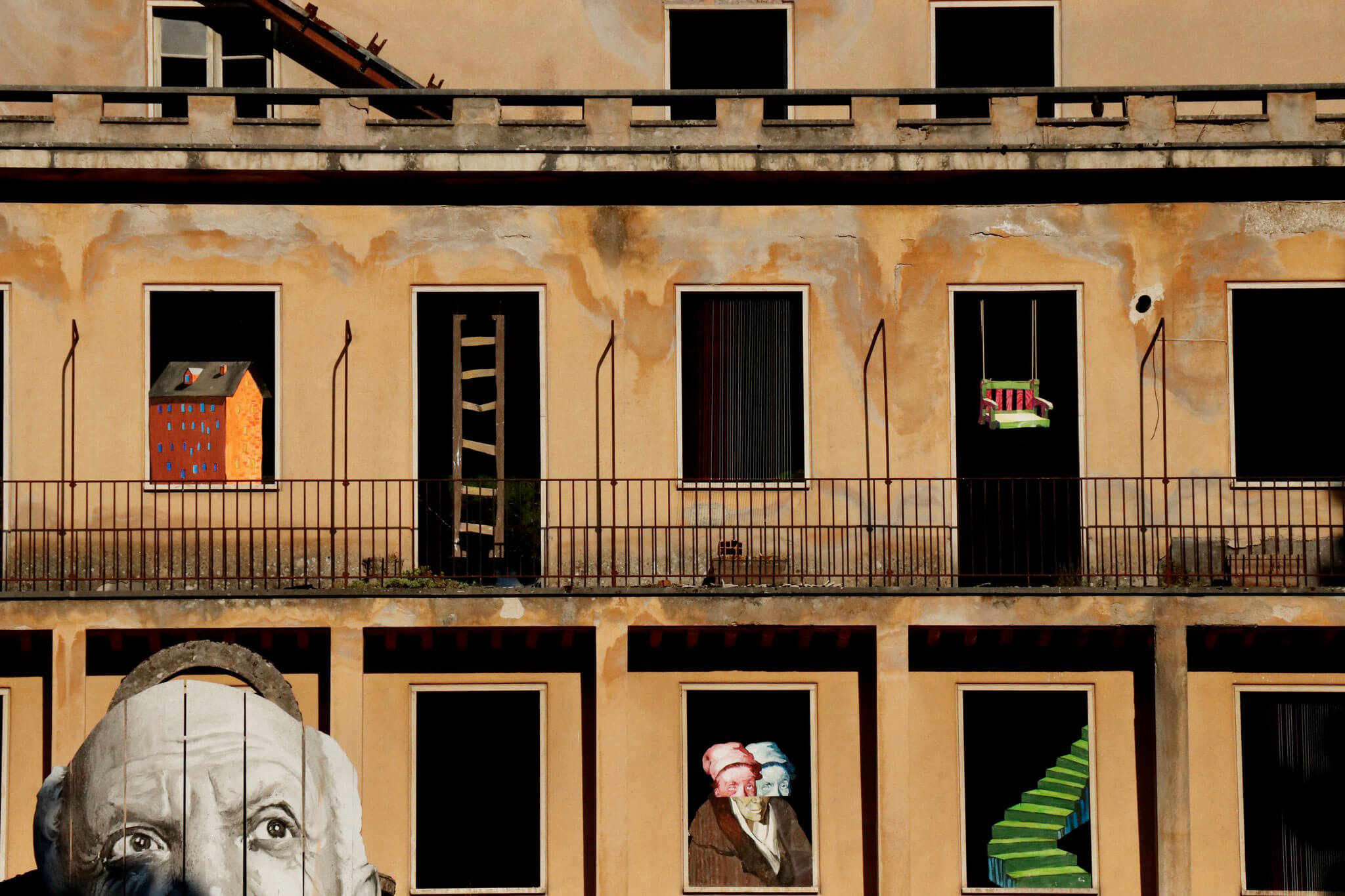 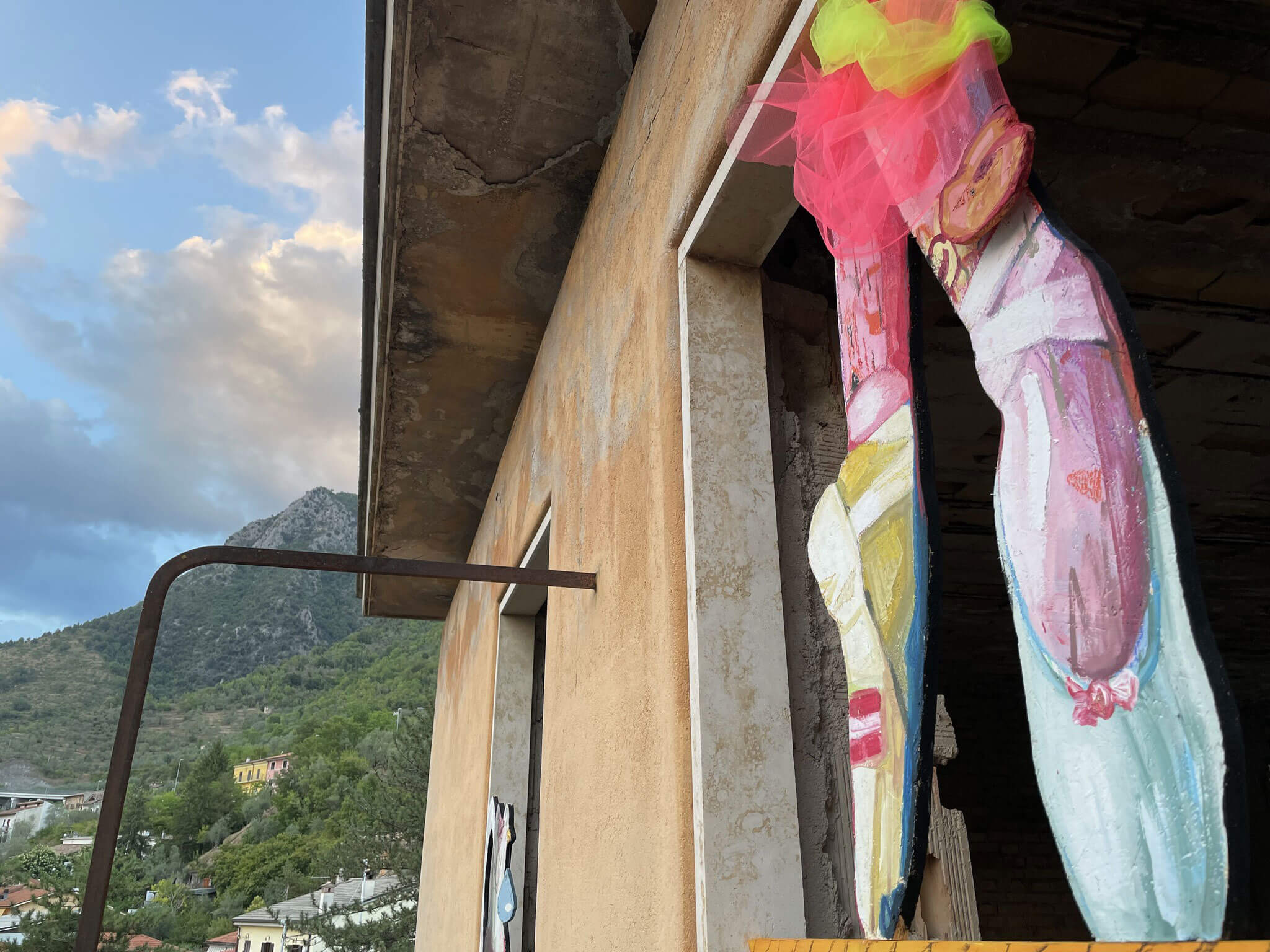 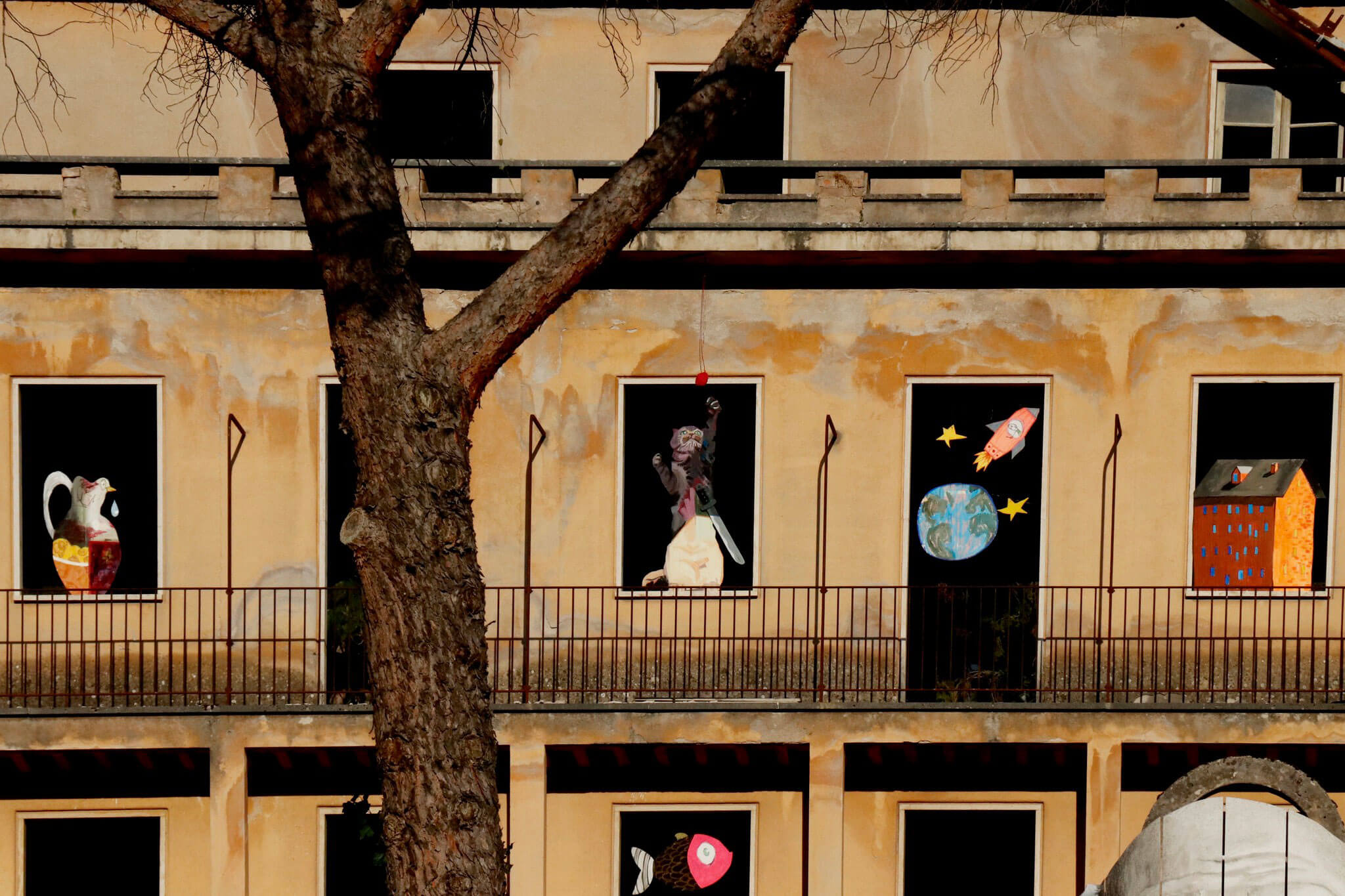