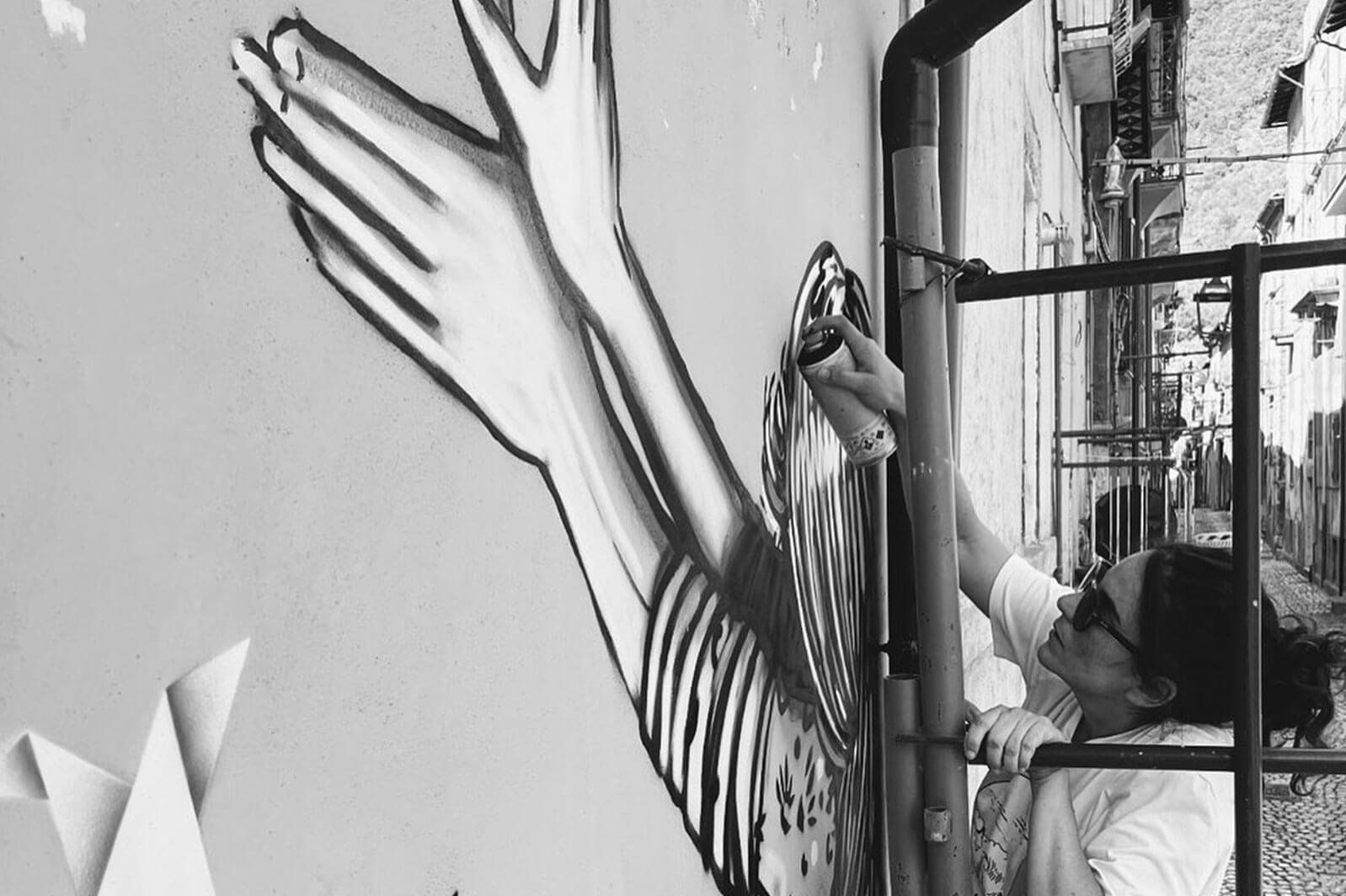 Italian street artist, illustrator and set designer, she received a diploma in Painting at the Academy of Fine Arts in Rome, then completed her studies in Spain with a Master of Arts in Art Criticism at Complutense University (2004) and an animation course at the Ars Animation School in Madrid. A multifaceted artist, Pasquini has experimented in her artistic career with a number of different techniques and genres, preferring to express herself in the public arena and establishing herself among the protagonists of the street art movement. On the street, her works range from small stencils on street furniture to large murals. Her research is focused on women, which Pasquini portrays in everyday, poignant moments, in environments that are far removed from the woman-object stereotype. Pasquini’s works are visible on the streets of several Italian and foreign cities, such as: Marseille, Paris, Amsterdam, London, Berlin, Oslo, Barcelona, Naples, Rome. One of her most interesting projects is Under Layers: the first experiment in 3D street artwork created in collaboration with the photographer S.C. Montesi in Rome in 2015. 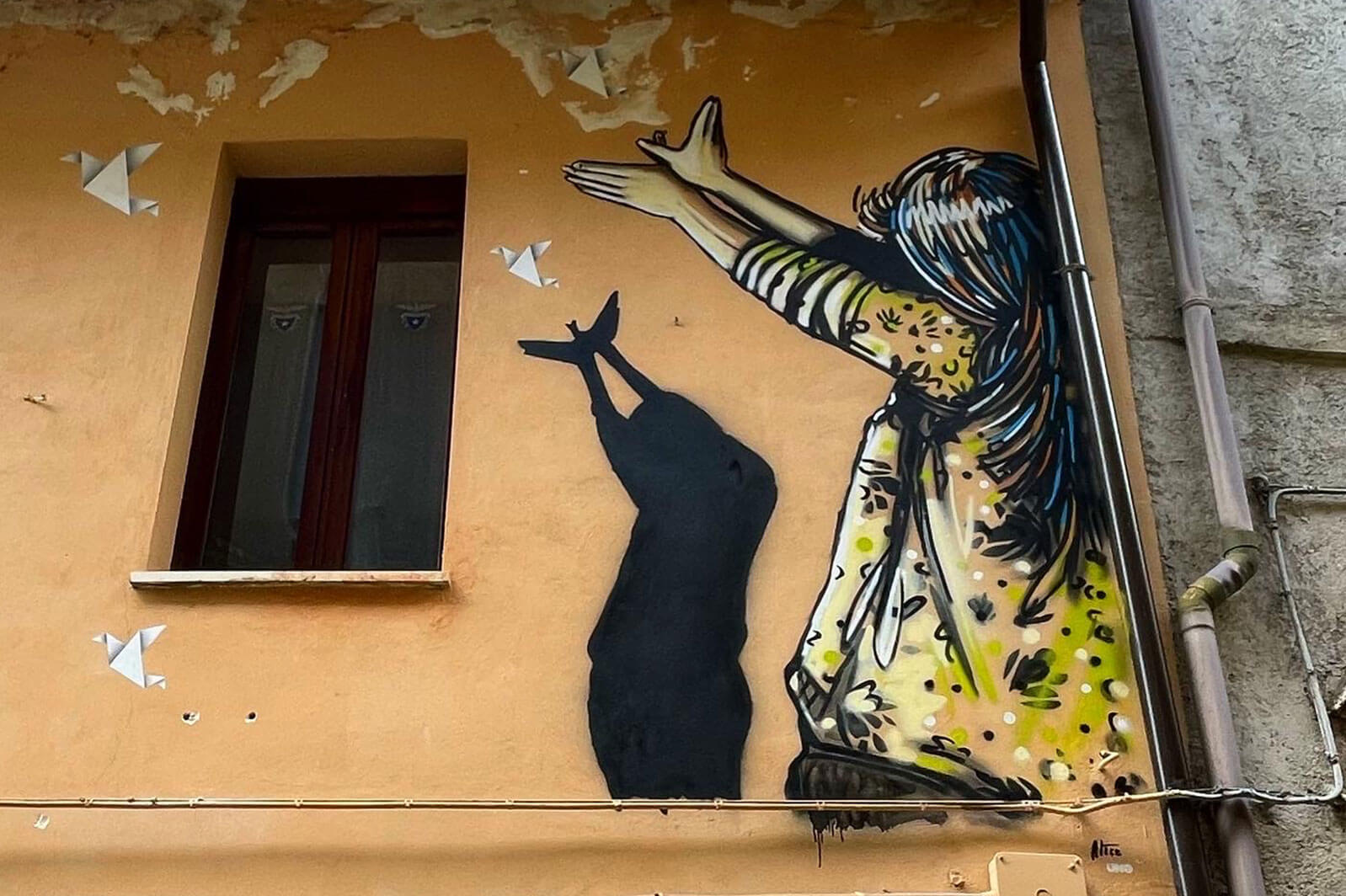 Description: While they play, children are constantly surprising themselves and through surprise, they acquire new ways to relate to the outside world. Surprise is also one of the most genuine features of public art. A piece of graffiti, a drawing or a graphic representation all take on meaning thanks to the context in which they are located, the colours that surround it and the history that distinguishes the area. In this sense, the artist has exploited the urban architecture to transform it into the elements of the painting. An electrical cable becomes the ideal place to do a great place to play with shadows. The element of surprise reminds passers-by that the most beautiful things in life are the small moments. The pieces combine the characteristic aspects of the two artists’ works, the female subjects of Alice and the graphic style of Uno.  The colours chosen fit into the urban landscape without disturbing its characteristic traits. 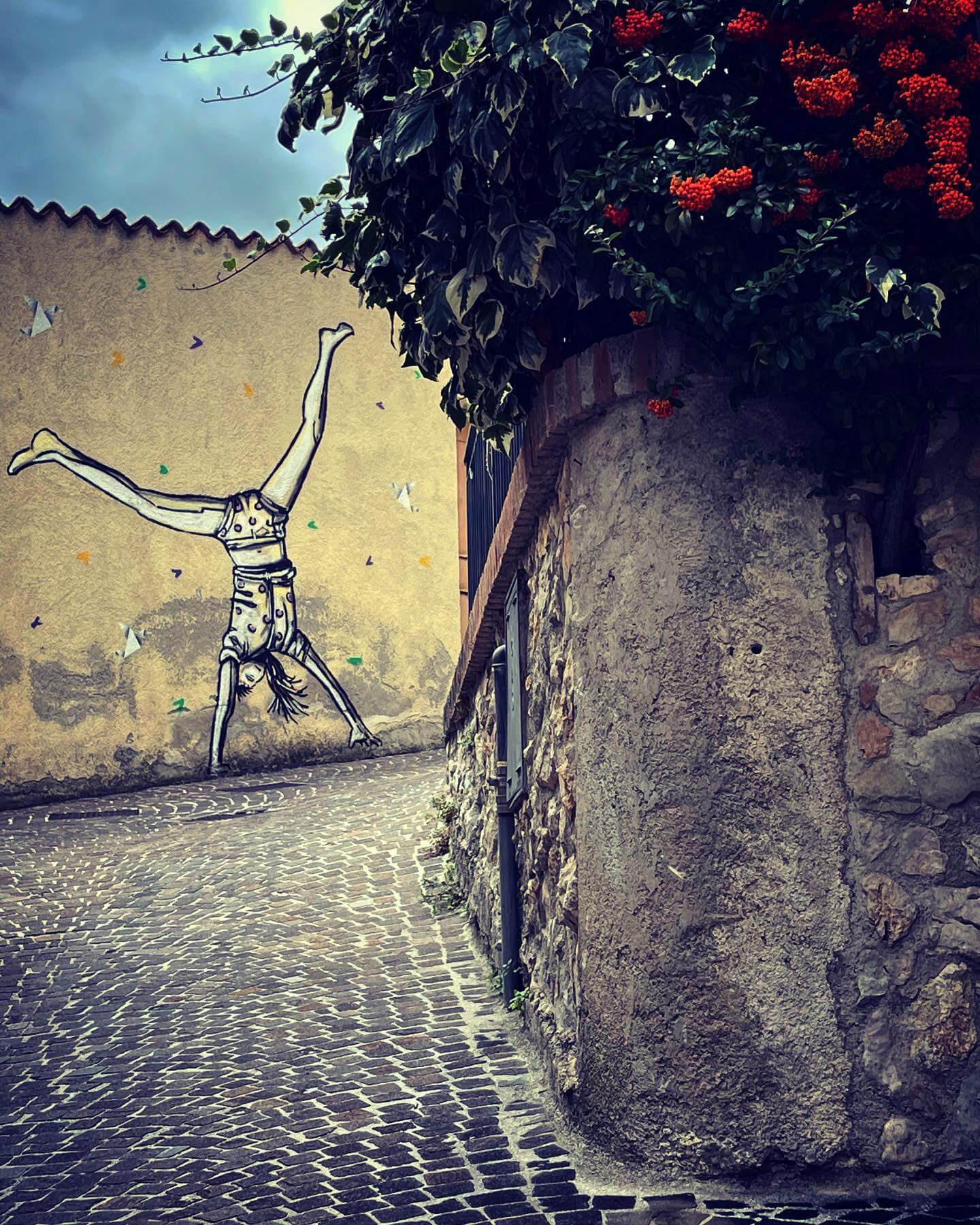 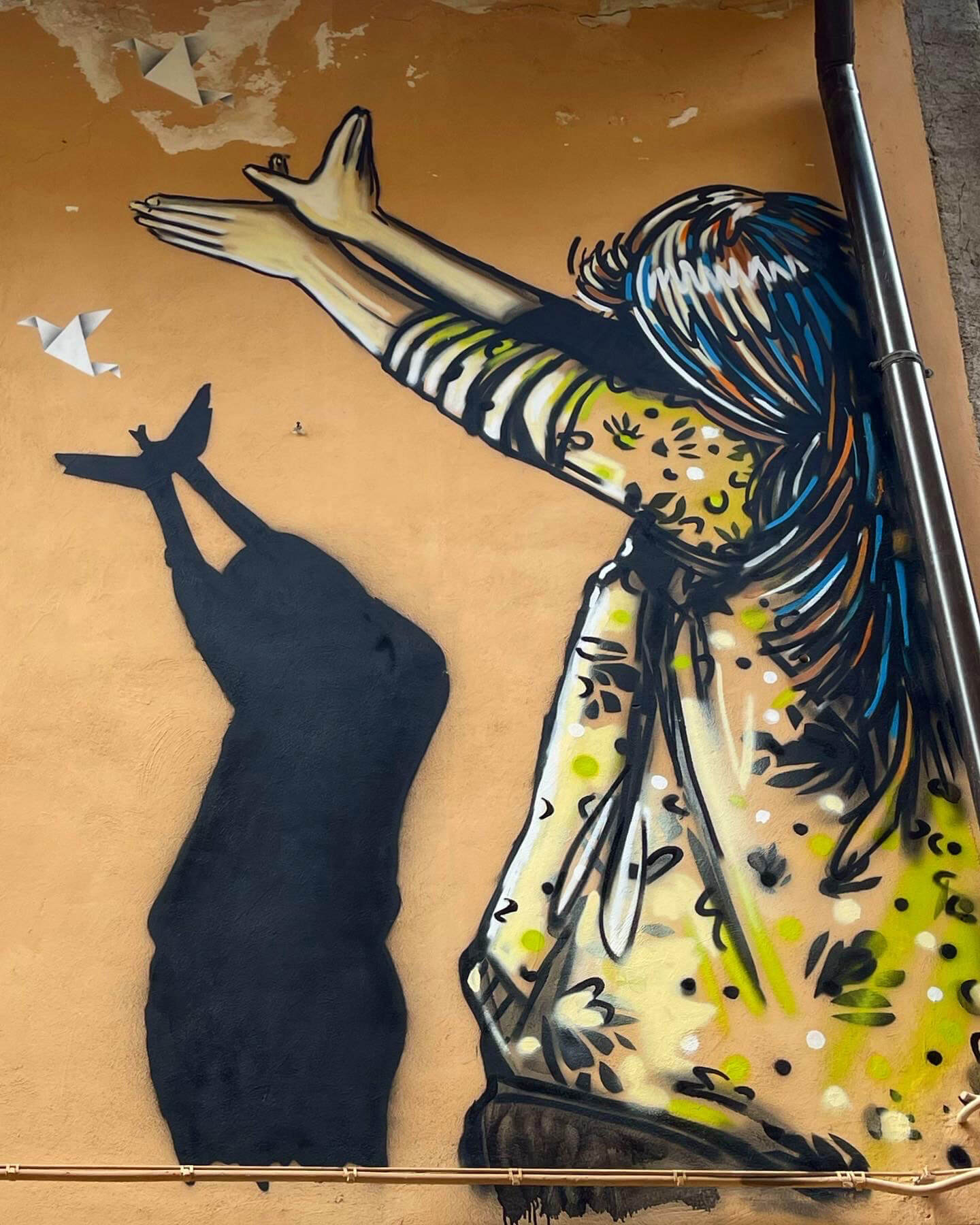 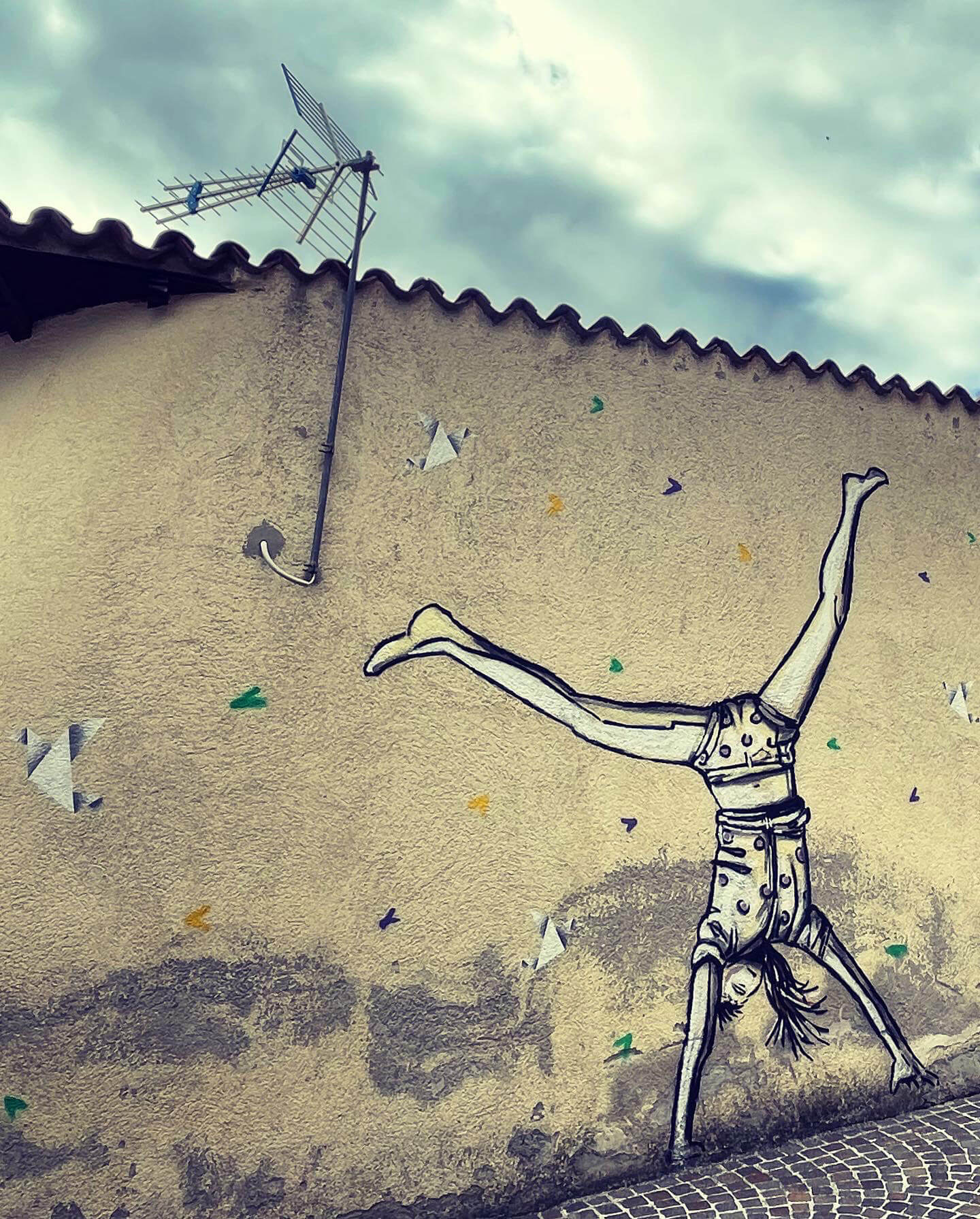 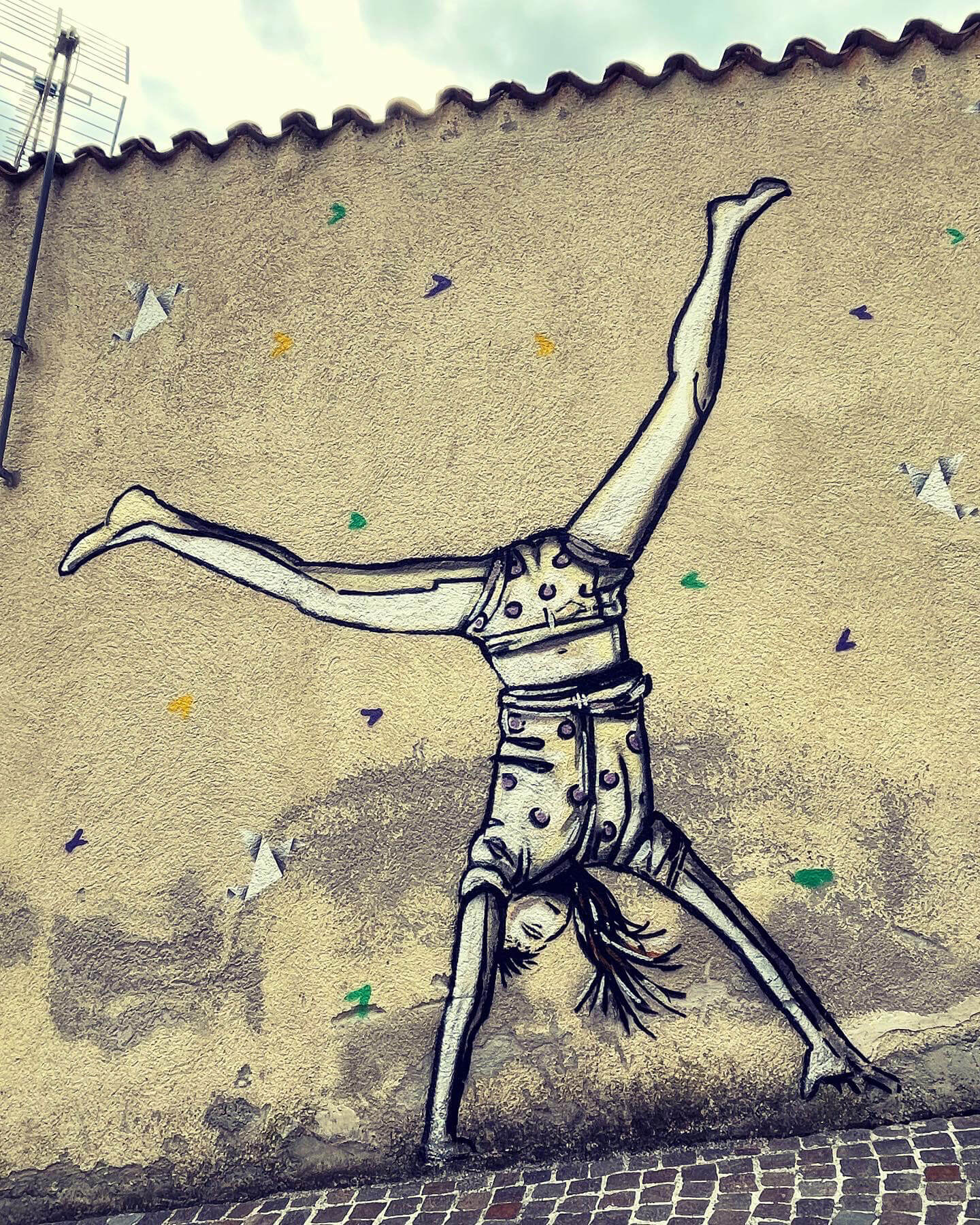 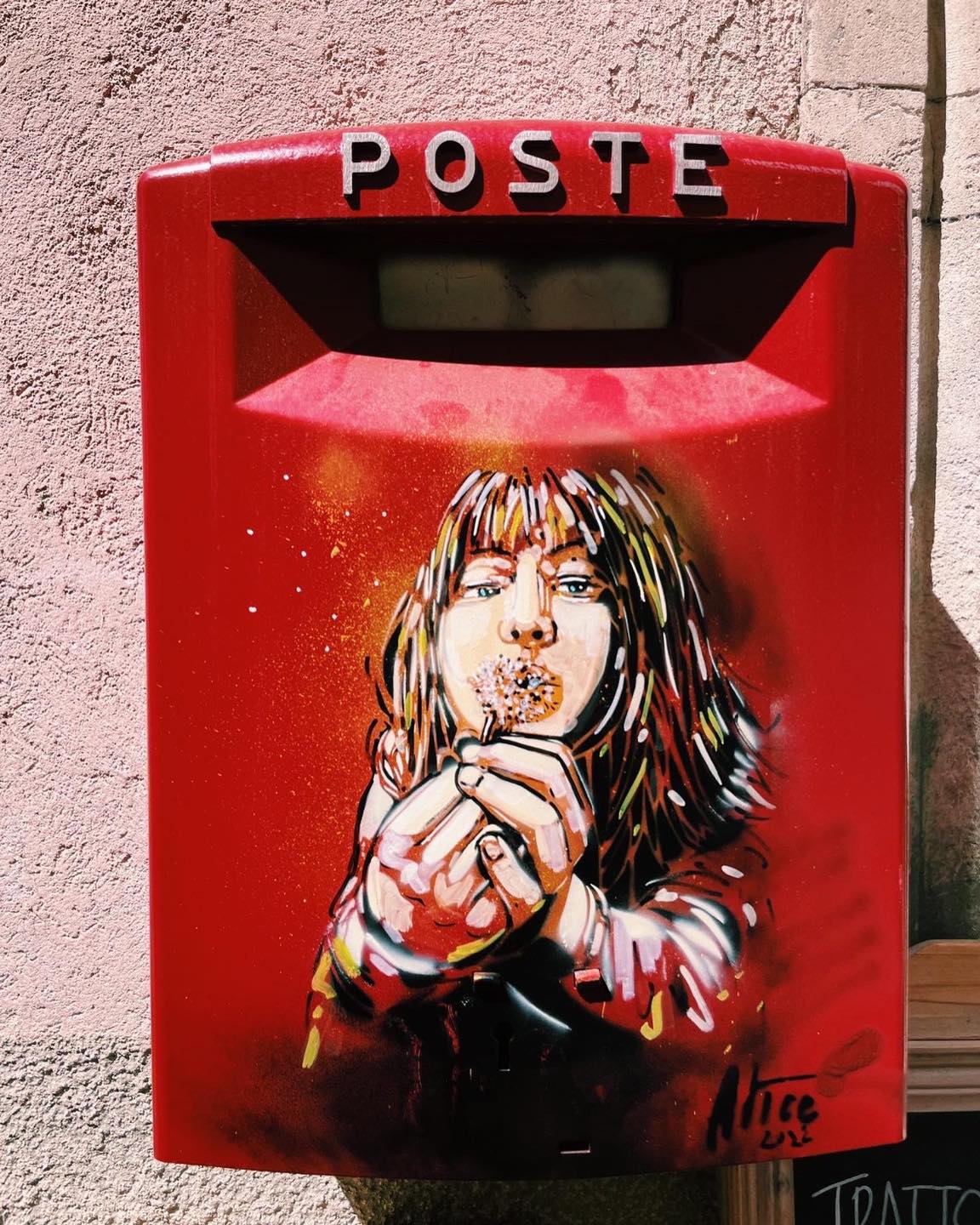 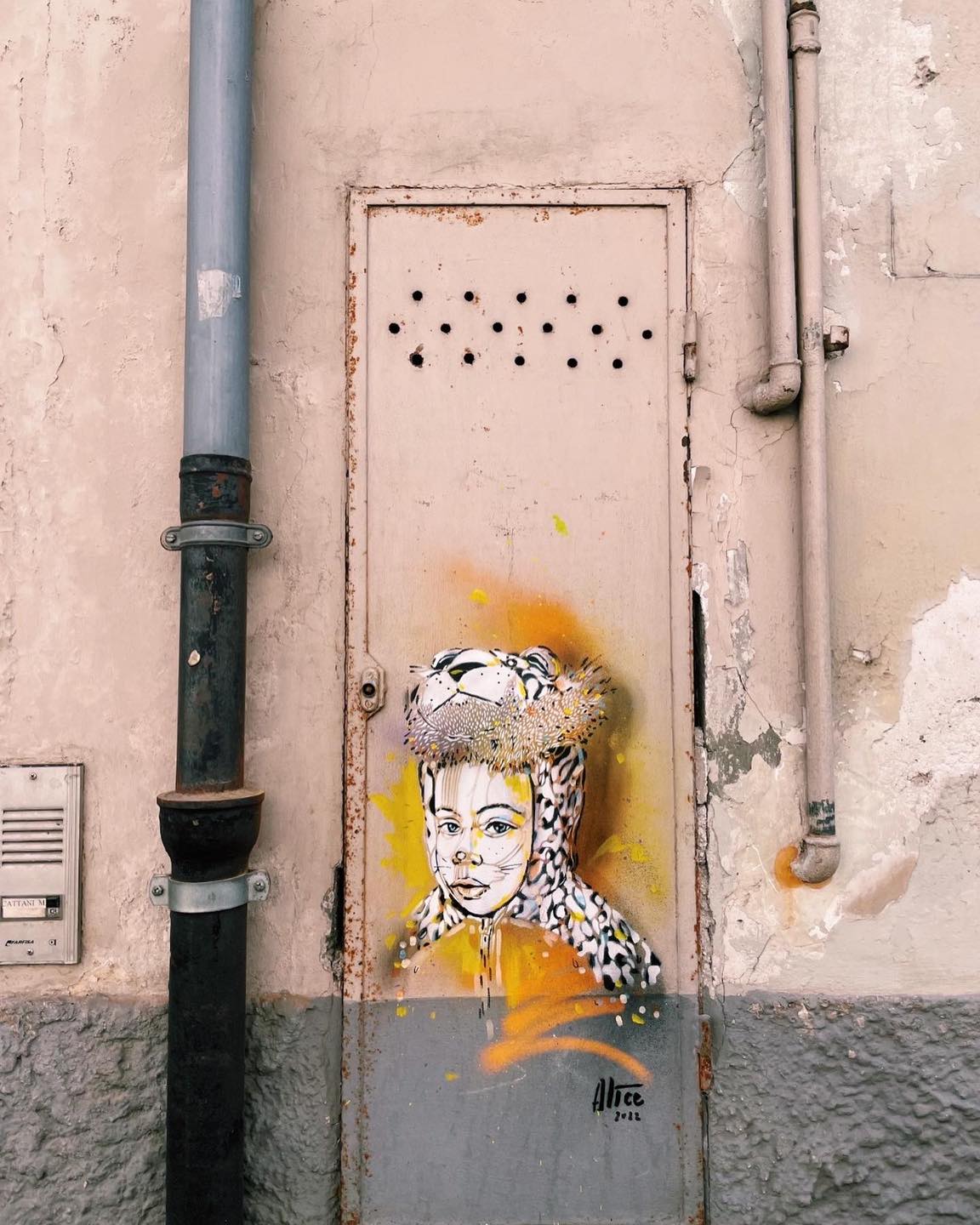 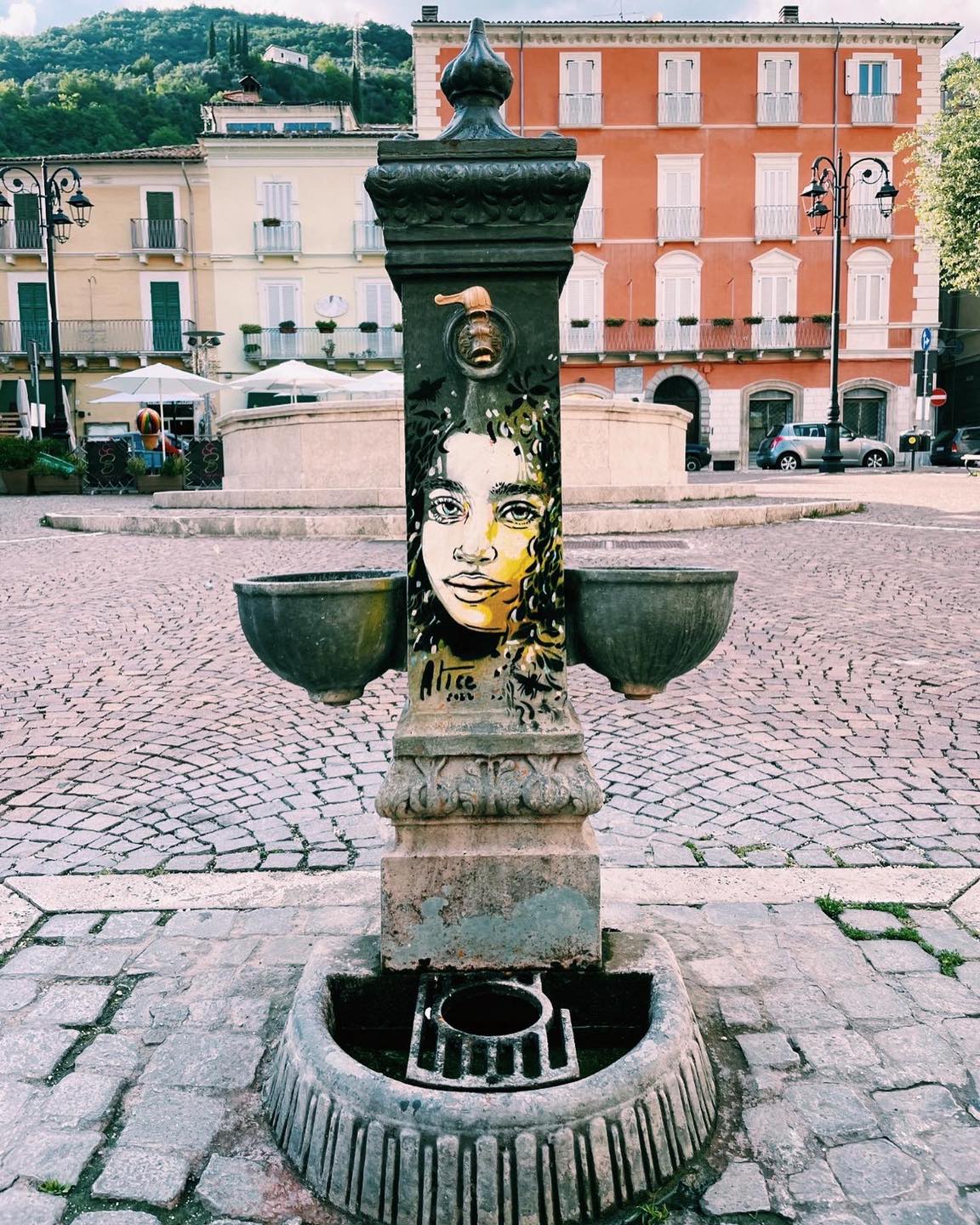 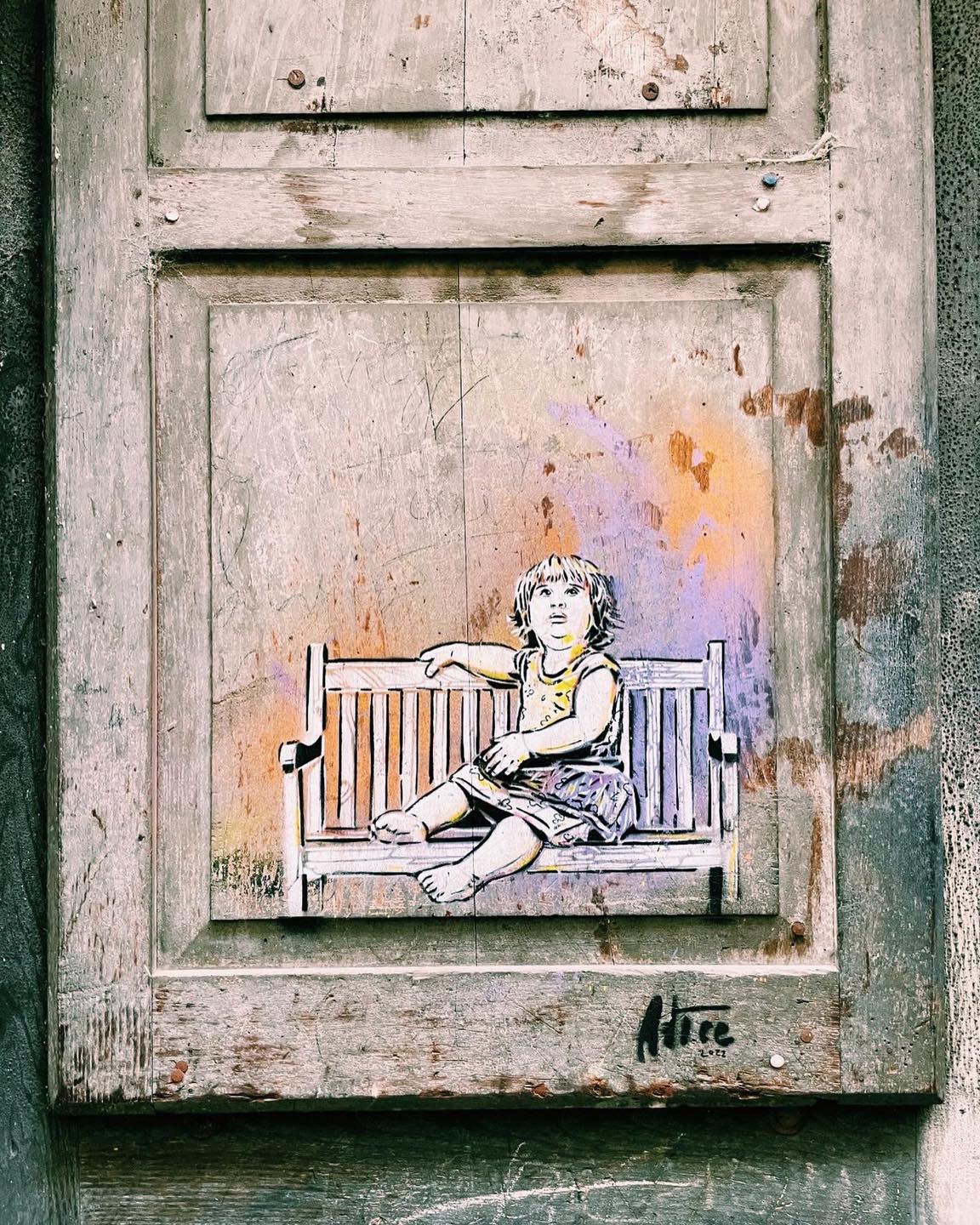 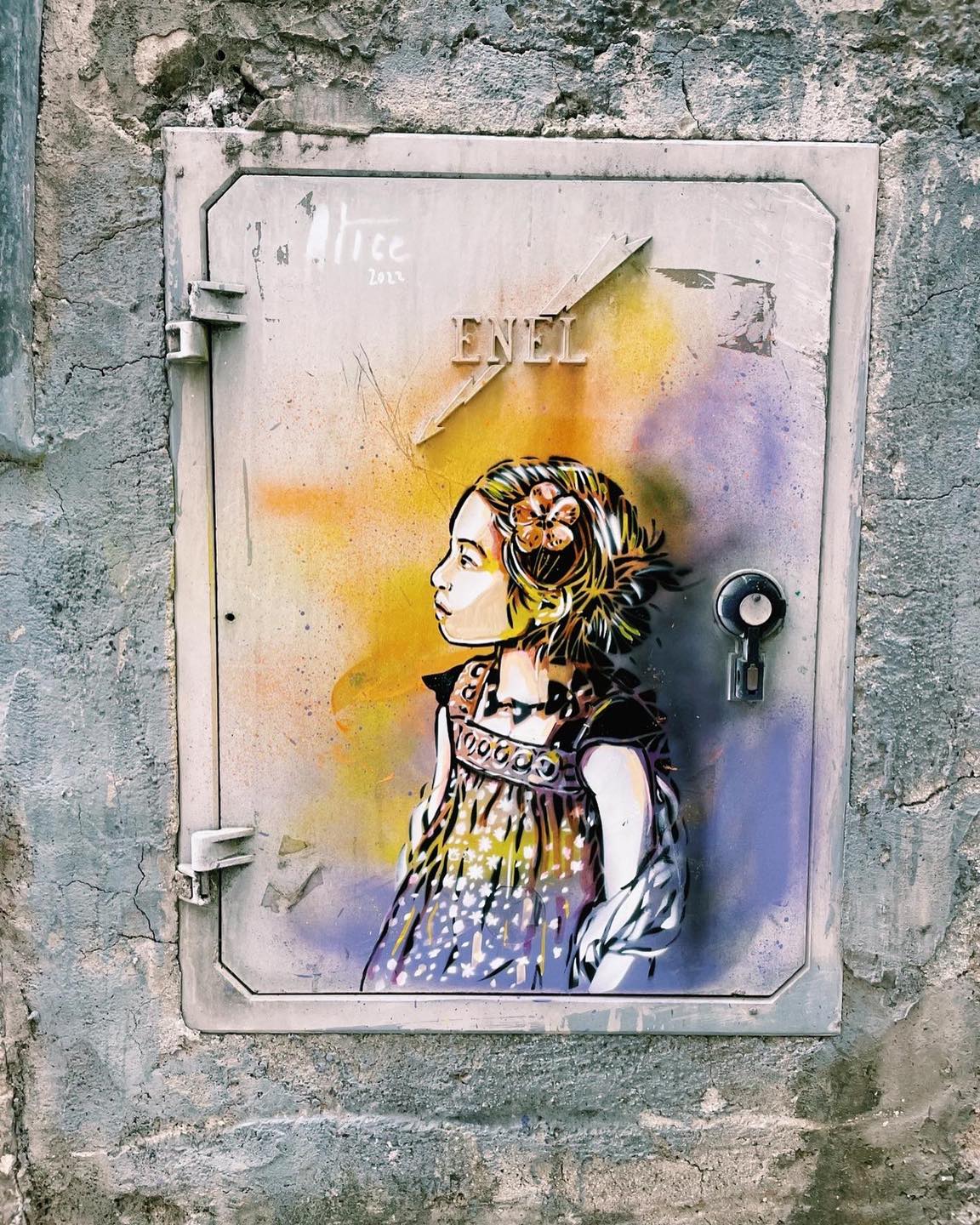 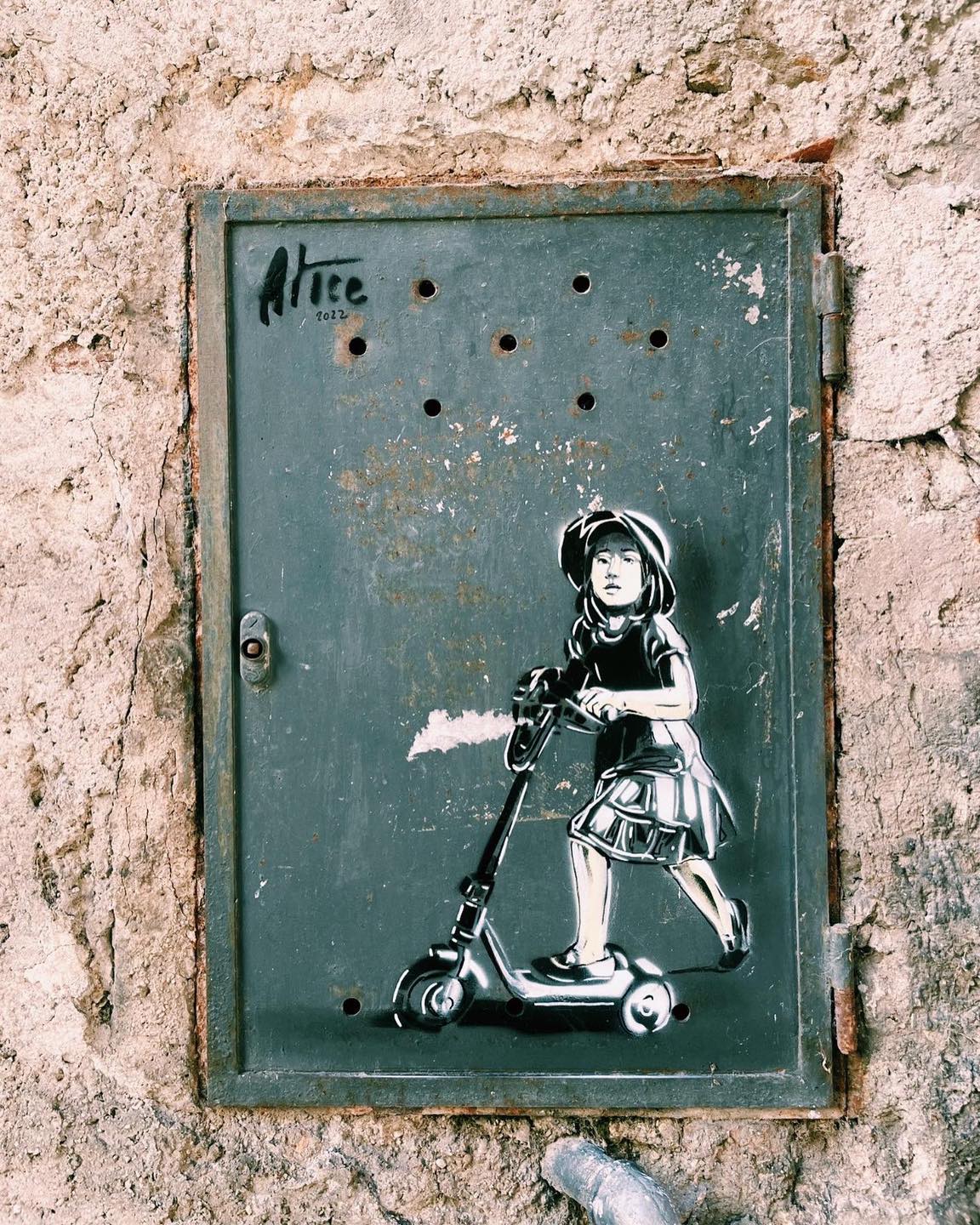